The following material was created by Dungeons & Dragons Franchise Creative Director Mike Mearls for his stream Happy Fun Hour, which you can watch live at Twitch.tv/DnD on Tuesdays at 4:00 EST or via replays on YouTube. This material is provided to facilitate community testing and feedback.

The Order domain presents the concept of service for an organization, society, or institution, whether that service is rendered in utter obedience to the letter of the law of unquestioned fealty to a deity’s edicts, Gods who offer this domain include Bane, Erathis, Phoitus, Wee Jas, Aureum, Maghublyet, and Asmodeus.

The gods of order promote obedience to the law above all else, rather than a specific individual or the passing influence of emotion or popular rule. They teach that contract and law are inviolate, and must be upheld. Their followers are typically concerned with how things are done, rather than whether an action’s results are just. Following the law and obeying its edicts is critical, especially when it benefits these clerics and their deities.

More importantly, law establishes hierarchies and power relationships, Those selected by the law to lead must be obeyed. Those who obey must do so to the best of their abilities. In this manner, law creates an intricate web of obligations that allow society to forge security from a chaotic world.

Clerics of order are typically tasked with enforcing the rule of law. They are leaders by decree rather than inspiration, but those who follow their dictates reap powerful benefits.

When you choose this domain at 1st level, you gain proficiency with heavy armor.

Starting at 1st level, you can invoke the power of law to claim authority over others. Once during your turn when you target an ally with a spell of 1st level or higher, that ally can use their reaction to make a single melee or ranged weapon attack against a target of your choice. If a single spell targets multiple allies, only one ally gains this benefit.

Starting at 2nd level, you can use your Channel Divinity to exert an intimidating presence over chaotic creatures.

As an action, you present your holy symbol and roll 6d10. The total is the hit points of creatures the spell can affect. Creatures within 60 feet of you that can see or hear you are affected in ascending order of their current hit points (ignoring unconscious creatures).

Creatures immune to the charmed condition aren’t affected by this ability.

Starting at 6th level, you can use your Channel Divinity to mark an enemy for destruction.

As a bonus action, you present your holy symbol and select a creature you can see within 30 feet of you. Until the start of your next turn, you and your allies gain a +5 bonus to all damage rolls against that creature. If damage applies to multiple creatures including the chosen one, the bonus applies only to that creature.

At 8th level, you gain the ability to infuse your weapon strikes with divine energy. Once on each of your turns when you hit a creature with a weapon attack, you can cause the attack to deal an extra 1d8 force damage to the target. When you reach 14th level, the extra damage increases to 2d8. 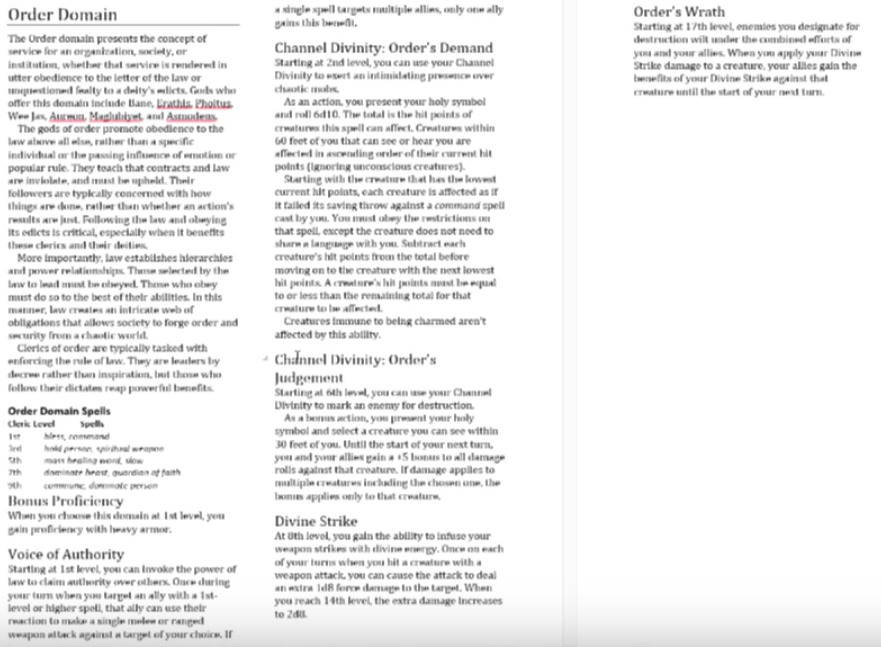 If you enjoyed this content, check out the ThinkDM Patreon page, where you can request content, DM tools, and get sneak previews.