I recently ran a poll asking players what races they thought should have Darkvision. With over 2500 responses in the first 24 hours, players expressed strong sentiment that many of the races should have their Darkvision removed or modified from the rules as written (“RAW”). Here are my observations, as well as a chart identifying what races have Darkvision by popular demand.

Players demonstrated an inclination for assigning Darkvision based on the environment of the race. This variance is shown primarily in the subraces of Elves, and Gnomes. Aasimar trended towards various degrees of not having Darkvision. Dwarves preserved a racial tendency towards Darkvision, notwithstanding their environment. Typical stubborn Dwarves.

Players also showed a preference for balance. Any race who has Darkvision 120′ must also accept the penalty of Sunlight Sensitivity (SS). Players also preferred to nerf Darkvision than to apply it. There was not a single majority suggesting that a race should be granted Darkvision.

Players agreed that all of the Underdark dwellers, Duergar (96%), Drow (96%), Svirfneblin (92%), should have 120’ of Darkvision, although there was some difference regarding imposition of the Sunlight Sensitivity penalty.

Players strongly feel that Half-Orc (69%), Half-Elf (76%), and Fire Genasi (77%) should not have Darkvision, contrary to their RAW-given abilities.

A majority of players also agreed that Darkvision should not be available to Aasimar (51%/57%/65%), High Elves (60%), and Forest Gnomes (55%), although there is strong support for keeping their Darkvision abilities.

While players generally agreed that the Dwarves had been assigned the proper Darkvision strengths, there was some support for change. 30% of players thought that Hill Dwarves should be stripped of Darkvision. However, Mountain Dwarves made a stronger case for Darkvision: while most supported keeping Darkvision 60’ (78%), there was more support for increasing them to Darkvision 120′ (12%) than removing it altogether (10%).

Players feel strongly that Dark Elves are properly Darkvision 120’ with Sunlight Sensitivity (89%). Among High Elves and Wood Elves, though, there is a closer split. While the balances are close, a majority of players believe that High Elves should not have Darkvision (60% vs. 40%), while the balance is the other way for Wood Elves (39% vs. 61%).

Glowing eyes apparently aren’t enough for Darkvision. A small majority of players generally don’t buy the premise that Aasimar possess Darkvision. Among Aasimar, players are most likely to believe that Fallen (49%) have Darkvision, followed by Scourge (43%) and Protector (35%). Interestingly, several players felt that the Fallen Aasimar should have 120 feet of Darkvision, split between regular (3%) and Sunlight Sensitivity (4%).

Here are the Aasimar third level abilities to give you a taste of the flavor supporting their alleged Darkvision:

The Elemental Evil Player’s Companion seems to suggest that Fire Genasi have a form of infravision:

The fact that this ability is “built in” to the Tritons may explain why players were more likely to grant Darkvision to Merfolk.

Players generally felt that half-races do not benefit from one of their parents having Darkvision, voting that Half-Elf (76%) and Half-Orc (69%) races should have their Darkvision stripped.

Conversely, there was even stronger minority support for granting Darkvision to Dragonborn (42%), although most still felt that Dragonborn should not inherit Darkvision (58%).

Least Likely to Have Darkvision

Most Likely to Lose Darkvision

Most Likely to Gain Darkvision

Most Likely to Gain Sunlight Sensitivity 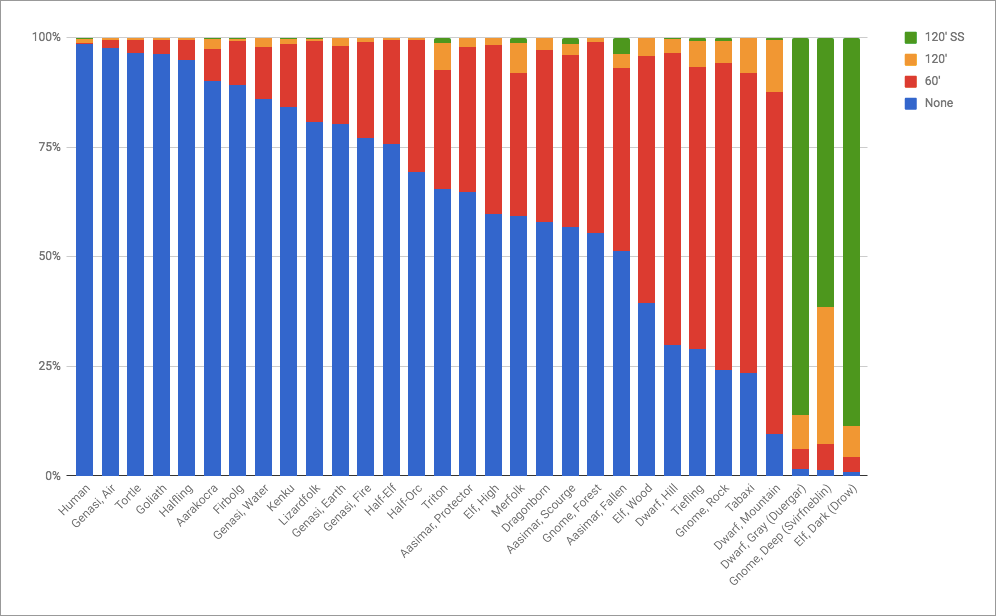 7 thoughts on “What races should have Darkvision?”