In the past, we’ve explored the damage output of a greatsword vs. greataxe. We’ve even examined how that damage is affected when you’re a Barbarian taking a multiclass dip in Champion (Fighter) for increased critical hit chance.

The Argument for Greataxe

A lot of how this math shakes out is going to depend on what you’re swinging at. There’s a school of thought that suggests the greataxe is actually better in application because a swingier weapon die (d12) is more likely to deal the top end damage that can fell your target in one blow. If true, this is an especially salient point, because feats like Great Weapon Master (GWM) allow you to make an extra attack when you deal fatal damage to a target. Two shots at dealing fatal damage is definitely better than one!

Does the math support this theory?

The key level for examination is level 1, which means we’ll be using a standard 16 Strength with a +3 bonus. There’s a couple reasons for this:

Note: this doesn’t strictly apply the same to every class. Fighters and Paladins will eventually get a Fighting Style that effectively increases their damage die. Barbarians will get Rage damage to increase their damage. This pushes the odds down the chart a little (which favors greatsword).

Now, without further ado, let’s jump into the numbers. Here are the odds that you will deal lethal damage on the first (and second) hit, depending on the target’s hit points. I’ve included some creature examples so you get an idea of practical application. 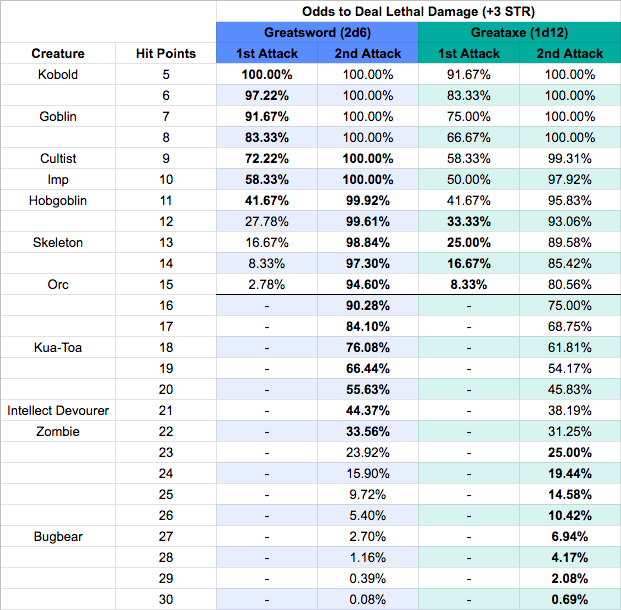 We can see that there is indeed some truth to the greataxe argument. If you need to deal 12 to 15 damage, the greataxe is more likely to kill on the first hit!

The Cost of Success

However, that additional bonus is not without cost.

First, a greatsword is more likely to kill anything with 5 to 11 hit points, which actually encompasses a lot more examples of low level monsters than the 12 to 15 range.

Second, while a greataxe is more likely to one-shot kill (never more than 9%), you’re trading off that probability for the second hit. For example, if you need to roll 15 damage to kill an orc, your odds to kill with a greatsword are less than 3%, while your odds to kill with a greataxe are greater than 8%. Who wouldn’t want three times the likelihood to kill? Well, that gets traded back for the second hit, where the greatsword is nearly 95% to kill, and the greataxe is closer to 80%.

For most hit point totals, the overall odds on greatsword become more favorable with more swings, because 2d6 is higher and more consistent damage than d12. Let’s see that overlap visualized on a chart: 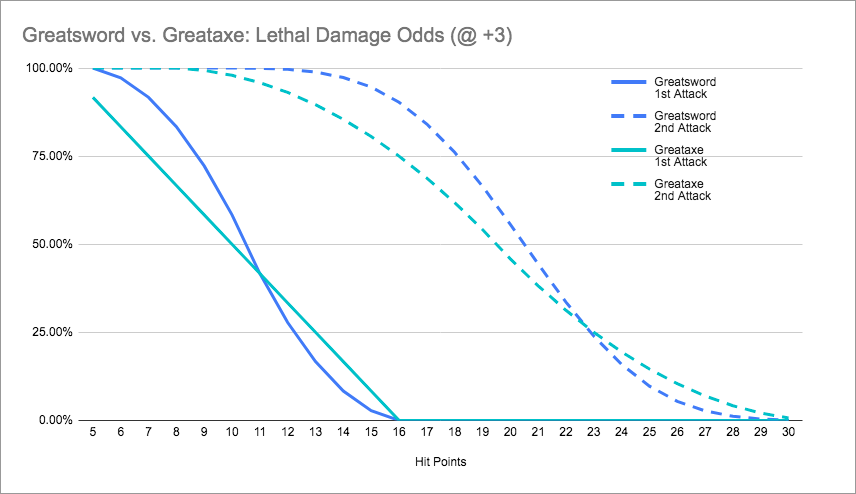 Ultimately, the combined odds to kill for a greatsword are pretty much higher across the board. Whether you’re willing to make the sacrifice for a small increase in your chance to kill over a limited range of hit points is up to you.

For more game analysis, sneak previews, and access to the sheets that back these posts, support us on the ThinkDM Patreon. Thank you for reading!