As a follow-up to last week’s post comparing the War Caster and Resilient (CON) feats, let’s take a look at how the numbers shake out if you’re playing a Variant Human or in a campaign where your DM lets you have a free feat at level 1.

Remember the lesson from last week:

Assumption 1. The character gets a feat at level 1.

Assumption 2. The variant human invests their floating +1 ASIs in their primary spellcasting score and their Constitution (CON) score.

Assumption 3. You’re not playing a Sorcerer or getting CON save proficiency elsewhere (such as from a Fighter dip). If you already have proficiency in CON saves, save Resilient for an ability score other than CON.

At level 1, War Caster is better. This is especially true since you’d have to take lethal damage to set some of the higher concentration DCs.

For this chart, we’re assuming that you maxed your spellcasting score and CON if you’re playing a Vuman spellcaster. Assuming a higher CON score is generally more favorable to War Caster. As your CON score decreases, Resilient becomes a stronger option.

These numbers hold out consistent through level 4, when you have the chance to take your first real ASI.

War Caster continues to excel through early tiers of play. Since odds at level 1 are going to continue through level 4, we’ll examine the shifts from the proficiency bonus increase at levels 5 and 9. 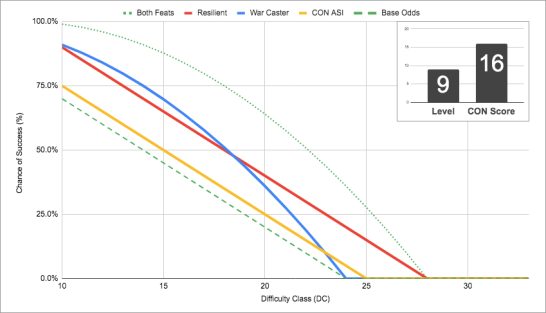 Once you’ve maxed your spellcasting score, your next ASI (at level 12) is the perfect time to pick up the Resilient feat. The odds when you have both feats is represented by the green dotted line at the top.

While War Caster is still a bit ahead against low DCs at level 12, Resilient kicks ahead the next time you level up and get the proficiency bonus increase.

Keep in mind that as you reach these higher levels, damage totals also tend to increase, making the DCs on the right side of the chart more relevant.

If you have invested your ability scores such that you have an odd CON score, Resilient becomes a stronger choice at earlier levels. 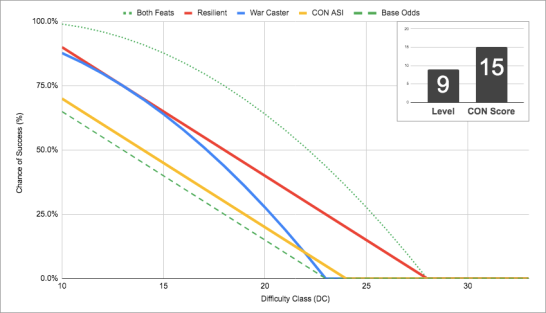 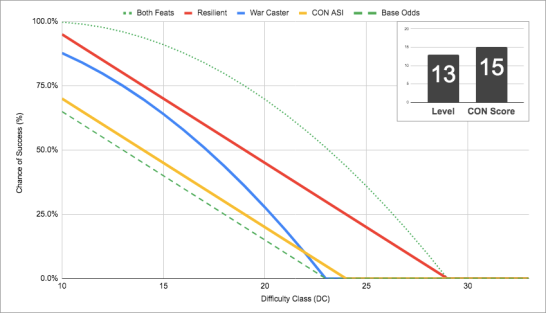 If concentration is what you value most, then you should strongly consider War Caster for your level 1 feat. Then, take Resilient (CON) at level 12 after you’ve maxed your spellcasting score.

This assumes you don’t have other intentions for your feats. If you’re limited in the number of feats you can select and plan on taking your character to level 20, it might be worth it to you to sacrifice the effectiveness of War Caster from levels 1-12 so that your character has better odds of maintaining concentration at level 13+. War Caster doesn’t keep being better because you took it early; it just carries you though those early levels better than Resilient.

If you want to check the actual percentages or run your own numbers, you can find the concentration save calculator on the ThinkDM Patreon.