I was checking out the new Explorer’s Guide to Wildemount when I came across an absolute gem: Magnify Gravity.

This spell is awesome! Super flavorful, must-take spell. Like, maybe the best spell. Anytime I start thinking “must take” a red flag goes up that gives me concern something might be overtuned.

Now, there are plenty of good reasons something might be overtuned. There’s legacy (Fireball), spicier versions of bland spells (Zephyr Strike vs. Longstrider), and spells that are isolated to and essential to the flavor of a class (Warlock’s Eldritch Blast).

This spell falls in the last category. It’s listed as only available to the Graviturgist subclass for the Wizard. In fact, there’s even a big warning label slapped on the side of all the Dunamancy spells:

However, that doesn’t mean you can’t get the Magnify Gravity spell otherwise. D&D lead Rules Designer Jeremy Crawford confirms you can grab Dunamancy spells from other class features (as long as it’s OK with your DM):

The question posed asked about a Bard’s Magical Secrets, which they unlock at level 10 (or 6 for Lore Bards). Magnify Gravity is probably too low of a level to justify taking with one of these choices.

Rather, it’s a great choice for melee-focused third-casters like the Eldritch Knight and the Arcane Trickster, who can tap into the Wizard’s spell list.

Since Dunamancy spells are open to other classes, it’s worth taking a look at their balance.

When I consider the balance of new spells, I like to compare them to old spells. Magnify Gravity has a lot going on, so it doesn’t make sense to compare it to a straight damage spell like Burning Hands. It’s also not a strict control spell, so you can’t compare it with something like Entangle. You need a blend. Among blended spells, Magnify Gravity has a lot in common with Earth Tremor. 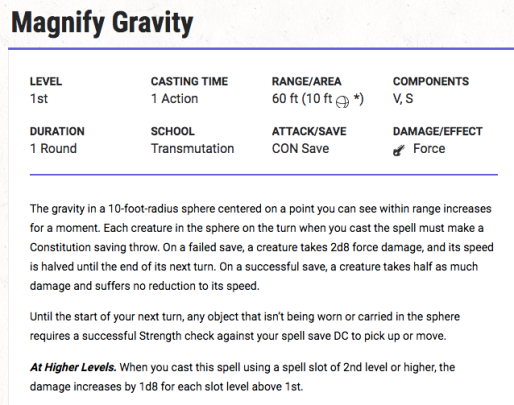 The general conceit of both these spells is that they do some AoE damage and try to lock down the area a little bit by imposing a temporary speed control and a save-independent environmental effect.

Here’s a side-by-side comparison of their features:

When we compare these features, it’s apparent that Magnify Gravity is a much stronger spell than its historical benchmark. Let’s analyze each category.

Magnify Gravity wins this easily. The significant difference here is the range. A squishy spellcaster is way better casting at range than in combat.

A sphere is technically bigger than a circle. While this seldom matters, it’s important when it does. A sphere lets you snag those levitating buggers like Mind Flayers and Beholders.

In terms of which saves they attack, Dexterity and Constitution are both strong saves. You’re splitting hairs based on what kind of monster you’re fighting.

Force damage is widely known as one of the best damage types in the game, unless you’re fighting a Helmed Horror. However, magical bludgeoning damage nearly rivals it. The only monsters that resist all bludgeoning are trees and low level swarms, most of whom are unaligned.

You might take a look at the movement effects and decide they’re a wash.

In terms of movement restriction, Magnify Gravity is actually better here in a sneaky way. If your targets have a readied action, they can use a full move on the trigger instead of the readied action. Targets of either spell could use this to move 15 feet. However, only the victim of Earth Tremor would get its full move on their following turn.

The prone condition has attack benefits your allies can capitalize on, if you can manipulate clever positioning with the benefit of favorable initiative. Pay attention, as this can easily turn on you if you catch your allies in the effect and the enemies go next!

There’s an argument to be made for which is the superior environmental effect.

I’ve certainly made great use of Earth Tremor’s difficult terrain. The problem is, since you don’t have any range, you’re stuck in the middle of it as a squishy low-level spellcaster. If you’re using it most effectively, you’re putting your life at grave risk. Sure, casters have tricks to get out of difficult terrain, but those often cost resources (Glamour Bard’s Mantle of Inspiration), if not spells that you often can’t cast until the next turn.

For Magnify Gravity, object lockdown is pretty situational, but I could see it coming in incredible use trying to lock down a McGuffin during a tense combat. Or, you could do some hilarious disarming/pantsing shenanigans. Sadly, this is shortlived, as it expires at the start of your turn. It does give you first dibs on the McGuffin, though!

The good news is that this spell is so dynamic that we have a lot of dials we can tune for balance. The important thing when changing a spell is to be fair and make sure it fits your table. Work with your players!

My first instinct is to remove the ranged component of the spell. I really like this change from a narrative perspective. I can imagine the wizard reaching up and pulling down the sky.

In terms of balance, this really adjusts the power of the spell. Instead of being an obvious nuke at the start of every combat, it involves an actual tactical decision. Spells are so much more fun when the spellcaster has to put their component pouch on the line.

If you want to preserve the ranged aspect of the spell, you can also cut the range to something more reasonable, like 30 feet.

Consider limiting the number of targets, especially if you’re not comfortable nerfing the range. You can accomplish this in a few ways:

Halving the radius of the AoE takes it from 10 squares to 4 squares. That’s much more in line with what you would expect from a ranged 1st level spell. It also still allows you to lock down a McGuffin.

The second option is also perfectly viable and easier to run in theater of the mind. If you combine this with a shorter range, the spell might not require any further balancing for your table. However, you’ll still have to do a little tweaking to tie the object lockdown feature to the vicinity of the target(s).

Personally, I like the last option since it still gives that AoE feel while capping the spell power. These limitations are the type of things that create interesting tactical choices for the player, but can be tedious for fans of a more narrative style.

Here’s an easy place that we can trim the spell power. I’m not saying we need to go all the way down to 1d6 like Earth Tremor, but halving it to 1d8 seems a rational choice. I would also cut the half-on-save mechanic since such small numbers are often more tedium than they’re worth. However, I understand the desire to avoid the bad feels of casting a spell that does no damage, even if the difference is merely psychological.

This is also a really flavorful and utilitarian aspect of the spell. I honestly wish it lasted longer. If we trim other parts of the spell, we might have room to increase this effect’s duration. The problem is, anything lasting longer than a round in D&D tends to last 1 minute, which typically spans an entire combat. That’s too long. Making this a concentration spell would make it less useful. You could make the spellcaster make a spellcasting check against an increasing DC to maintain the gravity after the first turn. All of these solutions are a little clunky, so employ them with caution unless you have an experienced crew that’s diligent about tracking.

I hope you find these tips helpful in balancing spells. Go check out Explorer’s Guide to Wildemount. It’s chock full of excellent content set in the famous Critical Role universe from the supremely talented Matthew Mercer. If you want more design and homebrew tips, check out the ThinkDM Patreon. 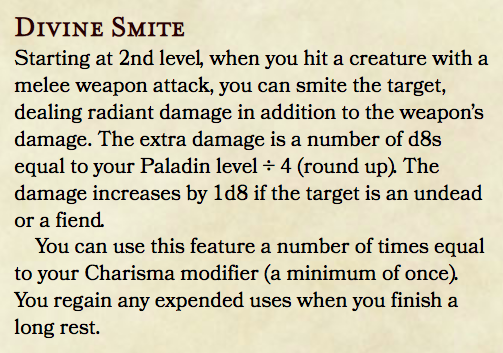 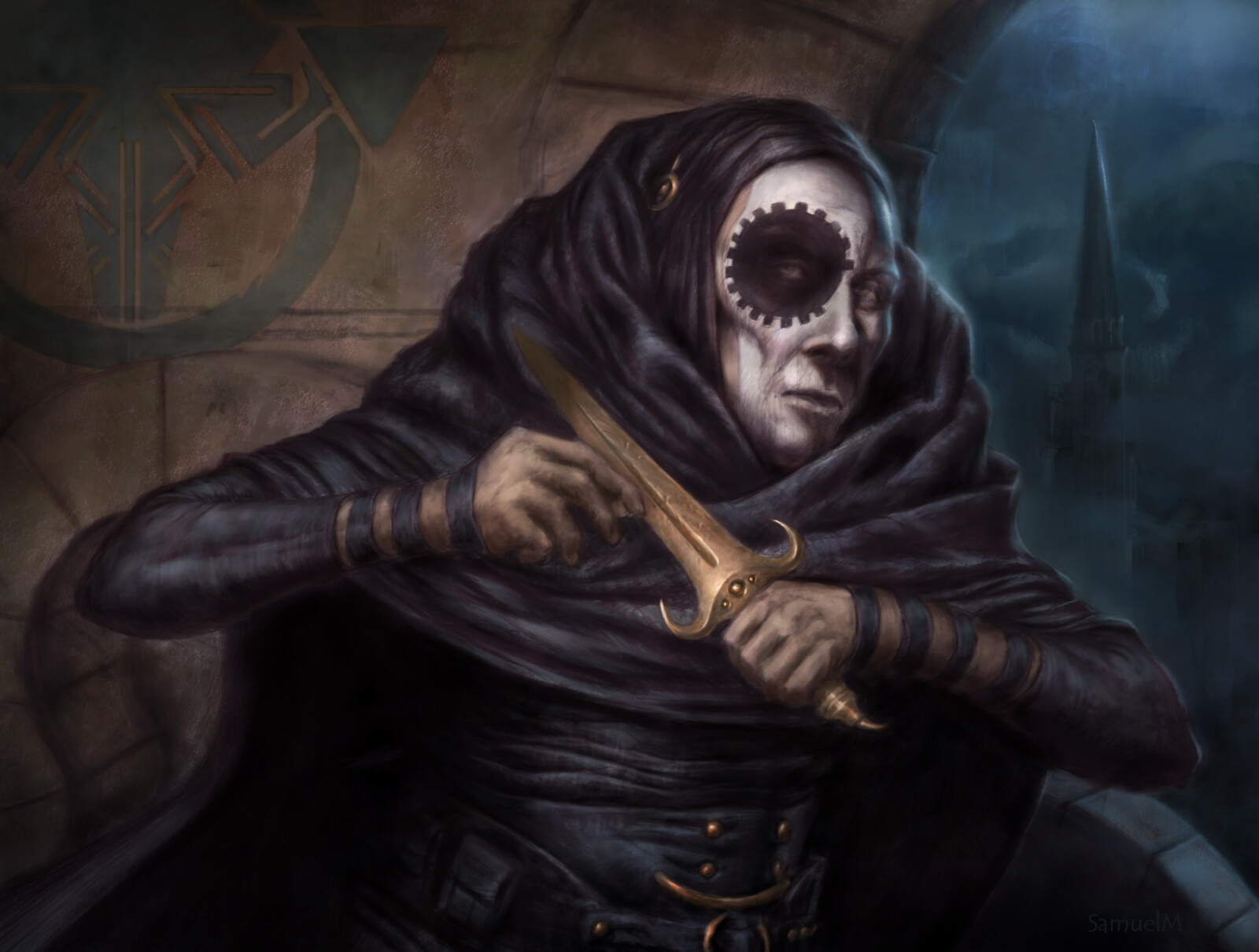