Flesh to Stone is a 6th level transmutation spell that has new mechanics from prior editions. Instead of instantly petrifying the target in ye olde “save or die” fashion, the target is restrained on the first failed save. The target is only petrified if they lose a “best of 5” save mechanic (Player’s Handbook p. 243). Is this a good spell? Let’s look at the mechanic to see how often its successful.

Flesh to Stone was invented by Mavin, an Arcanist of Netheril, and has been around for many editions. Casting the spell requires a pinch of lime, water, and earth–the ingredients for cement–to turn a target into a statue.

In past editions, this powerful spell functioned as a “save or die” mechanic, instantly turning the target to stone upon a failed save. The effect didn’t change much between AD&D and 3.5e: 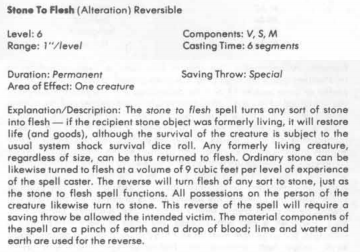 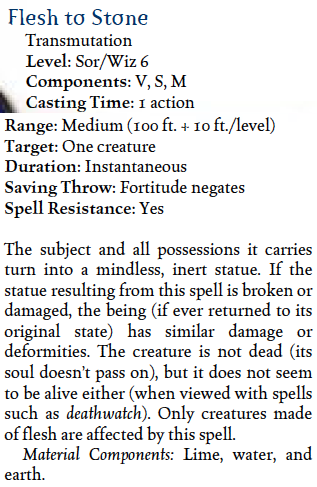 D&D 5e has generally moved away from “save or die” mechanics.  When cast in 5th Edition, the target of Flesh to Stone must make a Constitution saving throw. Upon a failed save, the target is “restrained as their flesh starts to harden.” Then, at the end of each of the creature’s turns, it must make another save. If the creature accrues three failed saving throws before three successes, it is petrified. If the caster maintains concentration on the spell for 1 minute, the effect becomes permanent.

Since you’re using a 6th-level spell slot, maintaining concentration for up to 1 minute, and waiting at least two turns for full stone, you probably want to know how likely it is that the Flesh to Stone will actually take effect:

Here’s the chance of success for a standard character that’s just unlocked Flesh to Stone at Level 11. They’ve achieved a 20 in their primary ability score by using their first two Ability Score Improvements (ASIs) to cap it out (or by rolling stats). We can assume that the D&D designers use this guideline, since feats are optional.

If you have different stats, you can plug them in to see your own odds! Add any special DC bonuses (i.e. Robe of the Archmagi, Rod of the Pact Keeper) directly to your Spellcasting Ability Modifier.

Here’s a sampling of Constitution saves from the 5th Edition Monster Manual, to provide some context for the chart:

Bestow Curse. Wizards get access to Bestow Curse. After the target fails a Wisdom saving throw, you can impose disadvantage on their ability checks and saving throws with the selected ability score. When cast at 5th level or higher, this spell does not require concentration, which is important because Flesh to Stone does. The obvious downside here is that you’re introducing yet another saving throw, and potentially delaying the efficacy of Flesh to Stone by a turn.

Portent is the a Divination school ability that allows Wizards to substitute a target’s saving throw for one of their saved portent dice. This effectively functions as “super disadvantage” because the player has access to two additional dice.

Contagion is not available to Wizards. Warlocks originally didn’t get Contagion, but patrons of The Undying do via their expanded spell list (Sword Coast Adventurer’s Guide p. 139). However, if the effects of Contagion are already taking hold, your Flesh to Stone is more fruitfully directed elsewhere.

Recognizing that a party often works together, including focus-firing on a BBEG, it’s still worth giving the save disadvantage numbers a look. The checkbox on the calculator will show your Contagion’s chances against a target with disadvantage on Constitution saving throws.

You can see this gives a significant bump to the +5 Spellcaster at Level 11: 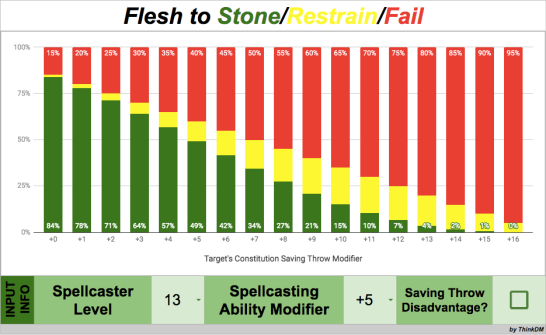 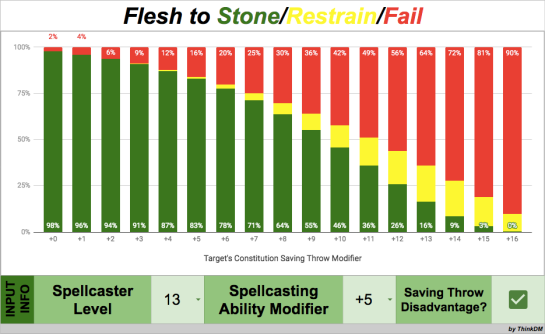 Contrasted with how the Contagion spell was built, Flesh to Stone has much stronger design. It requires fewer rolls, takes partial effect immediately, and doesn’t take as long to resolve.

While Contagion’s initial effects are the subject of debate, Flesh to Stone gives a lesser (though still powerful) effect if the caster wins the initial roll. In this case, it’s a save instead of an initial attack roll, but that distinction makes little difference beyond who is rolling the dice.

In Flesh to Stone, the first roll is already a part of the “best of 5” save mechanic. This results in a spell that is more likely and quicker to resolve:

When building your own spells, consider the strengths of this design. It’s a good lesson in tempering the “save or die” mechanics from earlier editions. Though, it results in a spell that is likely to do nothing against stronger foes.

At first I was afraid, I was petrified. Kept thinking I could never live, I’d either save or die.