The Oath of Heroism Paladin subclass is the latest playtest release featured in Wizards of the Coast’s September 18, 2019 Unearthed Arcana.

This class calls to mythological figures of the past, such as Hercules, Gilgamesh, or Cú Chulainn. Like these icons, the Oath of Heroism subclass combines amazing athleticism with supernatural might.

While the flavor is incredible, it gets some goodies that are concerning in terms of power creep. Specifically, the subclass gains access to some tricks which historically were only possible by relying on allies or by multiclassing into a new class.

One classic Paladin multiclass build is the “crit-fisher.” Paladins can make incredibly effective use out of critical hits. That’s because Paladins get an ability called Divine Smite that allows them to spend spell slots to deal extra damage. Since a Paladin’s smite is declared after an effective hit, and critical hits deal double damage dice, the Paladin can spend one spell slot to achieve an incredible damage boost (up to 10d8).

The crit-fisher build is so named because it seeks to expand the critical hit range in order to create more opportunities to double up on smite damage. Since Paladins don’t have any class features that expand their critical range, this has historically only been available by multiclassing.

When 5th Edition was released, expanding your critical hit range was only achievable by taking a 3-level dip in the Champion Fighter subclass. This was a significant investment, but due to the synergy with smites, it was often worth it to achieve one of the highest damage output martial characters in the game.

Wizards of the Coast has tossed out the crit-fisher’s multiclassing requirement out the window by building an expanded critical hit range directly into the Oath of Heroism’s Channel Divinity feature.

Legendary Strike allows the Oath of Heroism Paladin to spend a bonus action to expand their critical hit range to 19 to 20 for 1 minute (10 rounds). This doubles your chance to score a critical and double up on that juicy smite damage.

Making matters worse, the Oath of Heroism’s oath spells include the Haste spell, which is one of the most powerful third level spells in the game–especially for martial characters.

Haste gives the Paladin an extra attack, in addition to some other goodies (+2 Armor Class, advantage on Dexterity saves). While most Paladins are capped at 2 attacks, this allows the Oath of Heroism Paladin to attack 3 times per turn. More attacks means more opportunities to score a critical hit.

While this was technically possible by recruiting the assistance of an allied spellcaster, they would be using their concentration to focus on a buff that only affects a single martial character. Meanwhile, for the Paladin, this is an obvious and best use of concentration.

How Does it Compare?

Let’s run some calculations to see how the damage progression differs between the Oath of Heroism Paladin and a standard Paladin. We’ll be making some basic assumptions in order to keep this analysis from spanning into an entire dissertation. Those assumptions are as follows:

Each of these calculations will show the average damage per round against different Armor Class (AC) targets. There are some considerations which would theoretically lower the numbers in the long run, such as spell slot limitations, but these would only force a small downward trend as you begin expending lower level spell slots in their place. The overall effect is not that pronounced because it’s only calculating the added smite damage in the small percentage of cases where it actually hits.

At level 3, the Oath of Heroism Paladin gets Legendary Strike, which allows them to double their critical hit range as a bonus action. Compare this with most other Channel Divinity options that take an action to activate, and don’t directly impact your attacking prowess.

At 3rd level, the Paladin can expend a 1st level spell slot to deal an additional 1d8 damage on an attack (2d8 on a critical hit). Since this is most often used after scoring a critical hit, upping your critical chance from 5% to 10% is a great boon.

Here’s a Level 3 Paladin with 16 Strength and the Dueling Fighting Style using a longsword and spending a level 1 spell slot on a Divine Smite on a critical hit:

Not much difference here. However, you’ll note that we see greater separation once advantage is applied:

At level 5, the Paladin gets Extra Attack, which allows them to attack twice.

The Paladin also gets access to 2nd level spells at level 5, which means they can bump their smite up to 2d8 damage (4d8 on a critical hit).

Here’s a Level 5 Paladin with 18 Strength and the Dueling Fighting Style using a longsword and spending a level 2 spell slot on a Divine Smite on a critical hit: 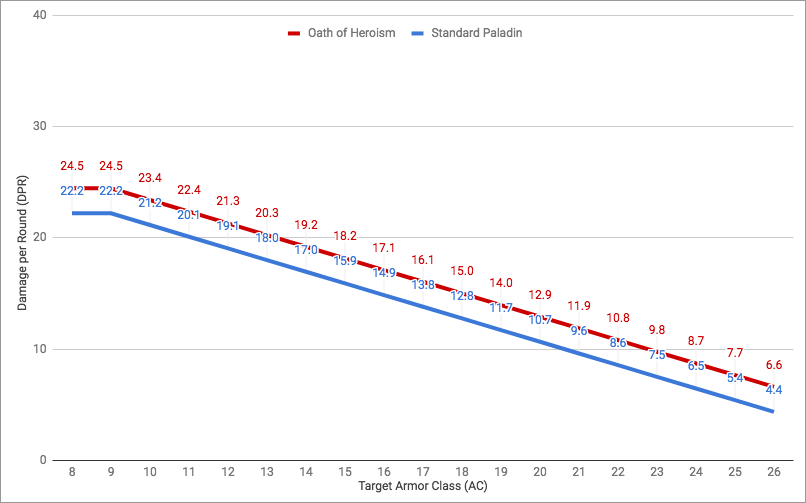 There’s already more separation as a result of the extra attack and the boosted Divine Smite damage. Again, it’s more pronounced when you apply advantage: 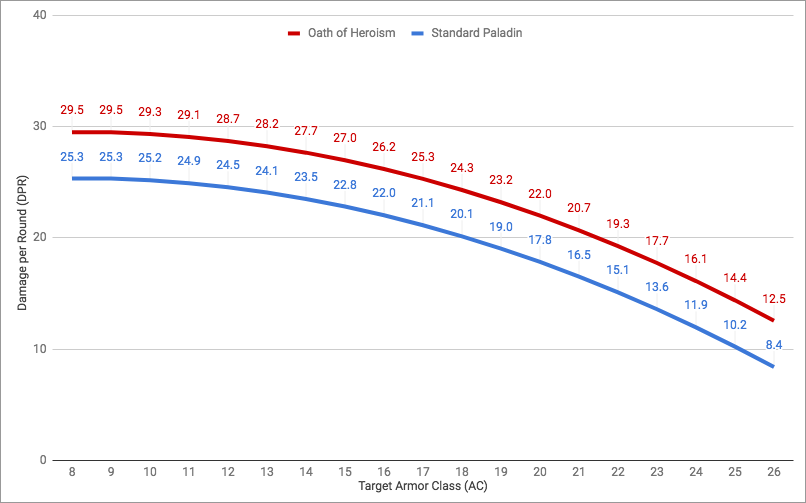 At level 9, the Oath of Heroism Paladin gets Haste as an oath spell, which allows them to attack three times. The Paladin also gets access to 3rd level spells at level 9, which means they can bump their smite up to 3d8 damage (6d8 on a critical hit).

Here’s when things really go off the rails. Here’s a Level 9 Paladin with 20 Strength and the Dueling Fighting Style using a longsword and spending a level 2 spell slot on a Divine Smite on a critical hit. Only the Oath of Heroism Paladin gets the extra attack from Haste:

As always, the effect is even more pronounced once we apply advantage:

At level 15, the Oath of Heroism Paladin gets Glorious Defense, which is basically a one-off Shield spell that lets you make an attack if it causes the attack to miss. Unlike Shield, it doesn’t last until the next round, so it only affects one attack. However, it does have unlimited uses. So, it basically guarantees that you’ll be able to make an additional attack when it’s not your turn. 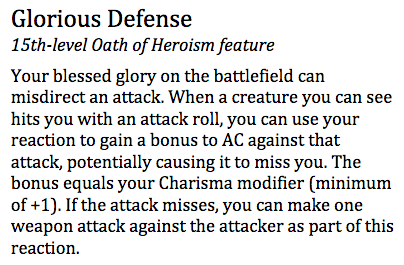 We’re not going to run the numbers on this, since it fills the same space as an opportunity attack. But, it’s something to consider, since it makes the odds of a fourth attack each round a virtual certainty.

At level 20, the Oath of Heroism Paladin get Living Myth. One of the features of Living Myth allows you to hit even when you miss with an attack.

We’re not going to run the numbers on this, since capstone abilities are already ridiculously powerful, and often don’t follow any sort of balance paradigm. Just know that it’s very powerful.

You simply can’t have one subclass that outpaces its brethren by 2x the damage output. This is bad design because it makes one subclass the obvious “best” subclass and pushes the old subclasses into “trap” territory.

Thankfully, neither the expanded critical hit range nor the Haste spell are essential to the flavor of Heroism. They’re simply power creep. So we can replace them with something more flavorful without damaging the playability of the class.

Glorious Defense should definitely get a use limiter. I would cap it by only allowing a number of uses equal to your Charisma modifier (likely 5 at that stage) per long rest. If you’re feeling generous, allow it to reset on a short rest.

Living Myth is completely absurd, but it’s a capstone, so have fun with it.

5 thoughts on “Is Oath of Heroism OP?”