On August 15, 2019, Wizards of the Coast released an Unearthed Arcana featuring two new subclasses: the Path of the Wild Soul Barbarian and the Way of the Astral Self Monk. One of the Wild Soul’s Barbarian class features is really…wild. It’s called Magic Reserves and it works like this: 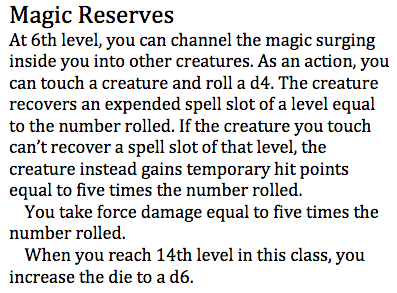 Massive credit to Ben Petrisor and Dan Dillon on the concept. The flavor just comes bursting out of this mechanic. In fact, it’s so flavorful I think it can occupy a greater design space. If you flesh out this concept, you can build an entire subclass around it.

With Unearthed Arcana (or any playtest material), the designers tend to overbuild. Then, when you receive the feedback, they can trim the fat and you wind up with a really nice final product with features that everyone playtested. This runs a little risk of disappointing some folks who liked features that got cut, but it tends to be best practice. That’s because the alternative is underbuilt playtest material. When you receive feedback on an underbuilt product, you either need to run an entire new run of playtesting, or you need to beef it up and print untested material. Untested stuff runs into issues all the time. So, what we see here is likely a little overbuilt.

With that disclaimer out of the way, Magic Reserves is going to definitely need some design work. It lacks a hard use cap, which leaves it prone to abuse. There is a soft cap in the sense that the barbarian takes force damage. Theoretically, they can’t take infinite damage. However, the fact that magic can be used to heal the force damage opens the potential for a feedback loop. All we need is something that heals more than an average of 5 hit points per spell level to unlock the infinite mana glitch.

We should always be careful not to judge a mechanic as broken based on how it interacts with another powerful mechanic. For example, many things are unbalanced when paired with the Lucky feat‘s dice manipulation.

In this case, the usual suspect is the Healing Spirit spell. A Druid or Ranger can just park it on the Barbarian and turn them into a mana battery. When Healing Spirit runs out, the Barbarian can recharge a 2nd-level spell slot for 10 HP. Healing Spirit heals 10d6 (average 35) hit points without upcasting or cheesing it.  While you run into action economy issues in combat, this basically turns every spellcaster in the party into a Warlock who recharges their spells on a short rest. While this may need to be addressed, we can still place the blame here on Healing Spirit.

One interaction does not a broken feature make. Unfortunately, the buck doesn’t stop there. There’s plenty of spells and class features that become problematic in conjunction with the Magic Reserves feature. Even if Druids never got Healing Spirit, you could still power your mana battery with goodberries.

Classic healers also get in the mix. While the math on Cure Wounds is borderline, the Life Domain Cleric’s Disciple of Life class feature makes it easy to cycle basic healing spells with Magic Reserves. Clerics could also turn their Channel Divinity into spell slots, which is probably not an intended design feature.

Beyond class features, there are also items that can reduce incoming force damage, such as the Armor of Resistance (pictured above), Ring of Resistance, and Brooch of Shielding. These halve the amount of healing you need to get into a feedback loop.

But, you don’t even need spells, class features, or items to abuse this mechanic. The Wild Soul Barbarian can reroll a ton of temporary HP for the party (up to 30 each!) and then take a short rest before the party sets off. Eventually the Barbarian will run out of hit dice, since only half of them recharge on a long rest. However, this party breakfast buffing steps on the Bard’s toes a bit.

We always try to come away from these analyses with a lesson for our readers. Here we have a few:

I assume the quick fix here will be to put a use limiter based on the Path of the Wild Soul Barbarian’s Constitution modifier. It may also need a little work in terms of the temporary HP mechanic. While the desire to cater to the entire party beyond the spellcasters is laudable, it’s a little overtuned.

If you’d like to see what this concept looks like as a full subclass, check out the Oath of Secret Knowledge Paladin subclass!